As nice as it would be, avoiding dents, dings, and other kinds of bodywork damage is next to impossible. You can drive carefully and find the safest looking parking spot, but accidents can always happen. However, by understanding a little bit more about car dents, you’ll be better prepared to take care of any damage when it does along.

Many common dents are easy to fix with paintless dent repair (PDR). This repair method helps restore your vehicle’s original condition all without affecting its original paint job. Unlike some other repairs, paintless dent repair is inexpensive and can be done very quickly. Let’s take a look at the different types of car dents, see how they’re caused, and if they can be fixed with PDR.

Car dents may appear superficial, but they are often more complicated than they seem. Sometimes you’ll find more damage underneath the car paint than what is visible to the human eye.

This is why you should always avoid trying to fix a car dent by yourself unless you happen to be a trained professional. You can very easily end up causing more damage to your vehicle and needing more extensive repairs than you initially did.

It takes training and experience to accurately determine the type of dent in your car and find the correct approach to remove the damage efficiently and without harming the original paint. Not all damage is the same or can be repaired in the same way.

Here are some of the most common types of car dents and their causes:

Dings are a minor form of car damage and are less severe than other forms of dents. They’re usually caused by a flung rock or car door slamming into your own. A typical ding is about a half-inch in diameter and can be easily removed with paintless dent repair.

Round dents are fairly common and are more significant than dings. They can come in all sorts of sizes, but always keep a round outer edge. These dents also vary in inner shape and can have shallow pool shape or the shape of a funnel with a point in the middle.

Round dents are often caused by round objects such as hailstones, soccer balls, baseballs, or round parts of another car. These dents tend to leave the paint undamaged, making paintless dent repair an ideal and inexpensive option for fixing them quickly.

Crease dents are dents where the metal looks like it has started to fold. They usually have a straight line at the deepest point of the dent and are normally found on the side of the vehicle.

Crease dents occur when an object such as a vehicle, bicycle, trailer, or tree branch impacts the car panel. Right after contact, the object drags along the car, creating the unique shape of this dent.

A crease dent is one of the more severe dents your car can receive. While they are extreme, crease dents can still be fixed by a highly experienced paintless dent repair technician. At JM Dent Repair, we specialize in fixing challenging crease dents to get your ride back in shape.

A sharp dent is one of the most common types of car dents. They’re caused by a tough impact, usually from a small object. You can find them on the body lines or swage of your vehicle. Sharp dents often occur in parking lots from collisions with another vehicle’s door, shopping carts, or the wind blowing objects into your car.

Because the metal is stretched outwards, sharp dents can sometimes leave a high spot with a deep scratch. They may only seem like a small round dent but there could be significant damage below the swage. Sharp dents can be repaired with PDR if the paint has not been damaged. 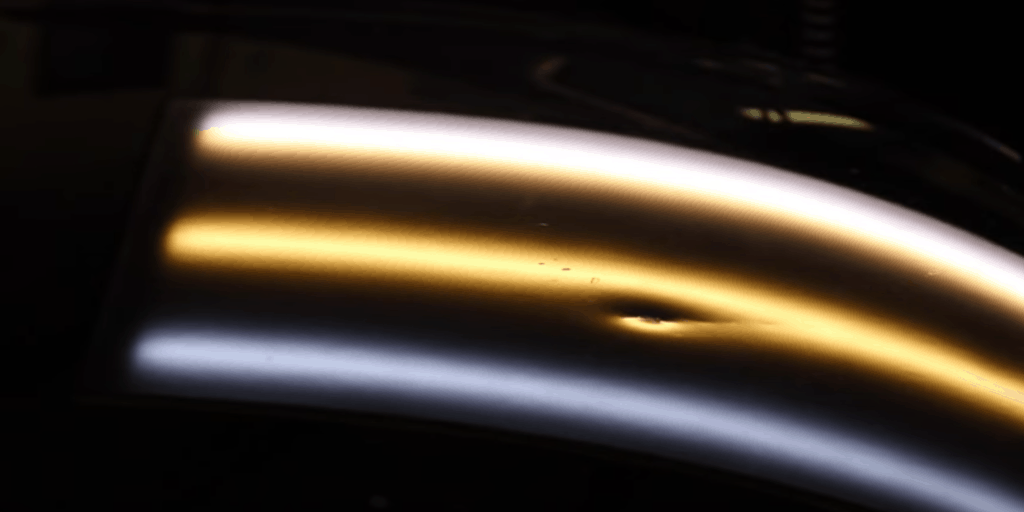 Hail dents are most often round dents caused by hail and are on the hood, trunk, and roofs of vehicles. The nature of these dents depends on the size and speed of the hail. Most hail damage is shallow and can be fixed individually with PDR with ease. Repairing hail damage becomes challenging when there are a large number of dents, which is often the case. When your car is in a hailstorm, it’s extremely unlikely that only a few hailstones cause damage.

If you’re in a car accident, your car may have dents that don’t have one central point or line but instead have many points and surfaces. These dents can vary in size and complexity but can be removed with PDR if the paint has not been damaged.

How To Fix Those Dents

Dents can be frustrating, especially when you don’t know how they got there. Lucky for you, JM Dent Repair can take care of those dents as if they never happened. Our technicians have worked with all kinds of dents and are specialized in getting your vehicle back into its original shape in no-time.

Beyond restoring your vehicle’s original appearance and raising its resale value, our paintless dent repair services are quick and affordable. You can expect to pay considerably less than you would at a traditional body shop and we often have your vehicle back in just a few hours. Get in touch today if you’re in need of car dent repair.